~Prequel to the Witch-Hunter trilogy~

James Bennett is a Yorkshire lad, making the big move to Oxford to start university.

His ambitions involve getting a good education; impressing the Rugby Club; and not throttling his roommate. All perfectly normal drama, until Hallowe’en.

A girl’s murder throws James into the dangerous world of witches, and those that hunt them.

After playing a sidekick in the Witch-Hunter trilogy, it’s only fair that James gets to be centre stage in his own prequel.

This can be read as a stand-alone, and does not contain any spoilers. It may contain witches, bad jokes and cringe-worthy scenes; but definitely no spoilers.

Kelly S. Marsden grew up in Yorkshire, and there were two constants i 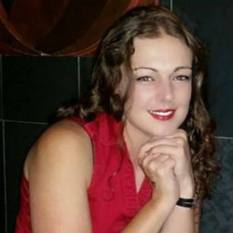 n her life – books and horses.

Graduating with an equine degree from Aberystwyth University, she has spent most of her life since trying to experience everything the horse world has to offer. She is currently settled into a Nutritionist role for a horse feed company in Doncaster, South Yorkshire.

She writes Fantasy stories part-time. Her first book, The Shadow Rises (Witch-Hunter #1), was published in January 2013, and she now has two successful series under her belt.

Charlotte had just made her second coffee of the day, when she heard a very insistent banging at the front door. Not in the mood for visitors, she reluctantly opened it.

And was met by the sight of James.

“I’ll never get used to your humour, James.” She said, stepping aside and letting him in. “Fancy some fresh coffee? And when I say fresh, I mean instant stuff I’ve only boiled once.”

James closed the door behind him, and made his way through the narrow corridor to Charlotte’s tiny kitchen.

Charlotte promptly poured an extra coffee and added sugar, her normally bright eyes were red, and it was clear she’d been crying.

“I broke up with Nathan.” She said, looking embarrassed that he had to see her like this.

“I think my roommate’s a murderer.” James countered.

Charlotte handed him a mug of coffee, shaking her head. “When a girl says she’s broken up with her boyfriend, most people would offer… never mind. You win. Why is Hunter a murderer?”

James gently lowered himself down onto Charlotte’s rickety sofa. “I followed him last night. He was bein’ weird, and I have a tracker on his phone-”

“And he went to this warehouse, where…” James trailed off, his throat closing around the words.

Charlotte misread his inability to speak, and gently rubbed his shoulder. “It’s alright, you’re safe here. Who do you think he killed?”

“Bea.” James gasped out. “You remember the blonde, Scottish lass? They hooked up at start of term; then the other night she was looking for him; next thing you know, she’s dead!”

Charlotte put down her coffee cup, her hand shaking too much to hold it. She looked at James in all seriousness, “And you saw Hunter kill her?”

James shook his head, thinking back to last night, and the hooded figures. He was sure it was Hunter, “I couldn’t clearly see who it was, but why would Hunter be there? It’s one hell of a coincidence, that he bails on the Hallowe’en party and ends up at the same warehouse where the girl he was shagging ends up getting sta-”

“Did you physically see him there?” Charlotte asked.

“No, I was following a tracker.” James admitted.

James snorted, “Trust the trainee-lawyer to say that.”

“Hey, I’m just trying to see every angle.” Charlotte said, punching his arm. “There could be another, perfectly normal explanation. Maybe someone mugged Hunter and stole his phone – that sort of person would be more likely to head to the dodgy side of town.”

“Ha, it’d have to be the king of muggers to get the better of Hunter.” James argued. “He’s super-fast, super-strong, and has anger issues. Which all adds up to someone very capable of murder.”

“Do you not remember how we first met? It’s not often I get thrown against a wall, instead of the usual handshake. And I do rugby training with him – trust me, it’s like getting hit by a car-”

“And I’ve seen him run – I forgot to show you.” James dug out his phone from the flowery handbag, and quickly found the video he’d taken weeks ago. “Look – look how fast he is! And don’t you find it weird that he’s never that fast in rugby games? It’s almost like he’s holding back.”

Charlotte looked at the video, and when the brief clip was over, she shrugged, “It doesn’t look that fast to me.”

“Well, it seemed it when I was watching with my own two eyes.” James tucked his phone away. “He’s not normal.”

“Yes, but there’s a huge leap between what’s not normal, and a killer.” Charlotte said, exasperated. “Don’t get me wrong; I want to help you James, I really do… have you been to the police?”

“Yes, I stayed there overnight.” James answered. “I got knocked out, and some cop must’a found me. Next thing I know, I’m waking up in a cell.”

“Oh no, what happened? Did someone attack you?”

James opened his mouth the speak, but he didn’t even know what to say. He remembered getting knocked off his feet by some powerful force, but that didn’t make sense.

“What did the police say?” Charlotte asked, when it was clear James wasn’t giving her an answer.

He shrugged, “Not much, just that Bea had died. They were dodging a lot of my questions.”

James shook his head. “There was summat not right about the whole thing. It just felt shady.”

I Read What You Write!
What is Life without Books